Last week I visited the Citizen’s Theatre for the opening night of Noël Coward’s, Hay Fever. Until last year I’d never seen a Noel Coward play, but I put that right by going to see Private Lives at the Theatre Royal. Having really enjoyed it, I was quite looking forward to this show.

Hay Fever is set in the twenties and throws you in amongst a wonderfully dysfunctional family over a weekend when each member has independently invited a guest down for the weekend, without having mentioned it to anyone else. We have Judith, the retired stage actress, her novelist husband David, and their two grown-up (ish) children, Sorel and Simon. Oh, and Clara, the housekeeper, who could easily be the most brilliant character in the play.

As I found with Private Lives, Coward’s dialogue is quick, sharp and ironic. He allows his characters to be monumentally silly with the most wonderful results, always ready to dress them down with a sharp quip from whoever they happen to be sharing the stage with. 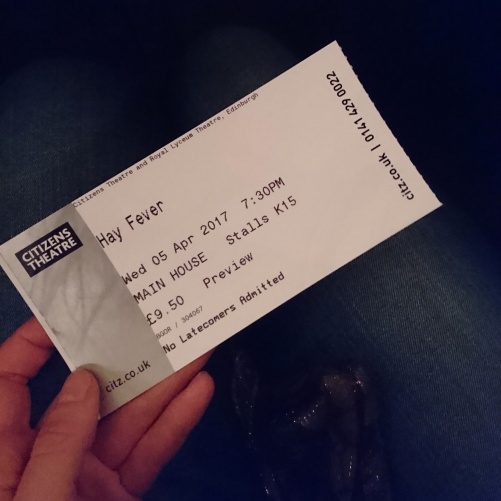 I loved Charlie Archer as Simon, he was exactly as infuriating as anyone’s brother ought to be when he interacted with Sorel, quickly transforming to the perfect doting son whenever his mother Judith, played delightfully by Susan Woolridge, happened to be around. However, Myra McFadyen’s Clara made the night for me. She was the only character with any sense and dripped typical Scottish sarcasm at every opportunity.

I think perhaps there was the odd fluffed line or a brief moment of confusion, but given it was opening night and it didn’t disrupt anything, I can hardly complain. This kind of silly, fun comedy was exactly the kind of easy going thing I was hoping for, I strongly recommend a visit to The Citizen’s Theatre while it’s showing. Personally, I’ll now be looking out for more of Coward’s plays in the future. I think it’s safe to say that I’m a fan.

7 thoughts on “Theatre: Hay Fever at the Citizen’s Theatre, Glasgow”