Have you seen the movie The Thirty-Nine Steps? Or perhaps one of the many theatre productions? I’ve not been lucky enough to see it at the theatre (yet) but I do remember seeing the Alfred Hitchcock movie a while back. Let me tell you, the book is barely like the movie at all. 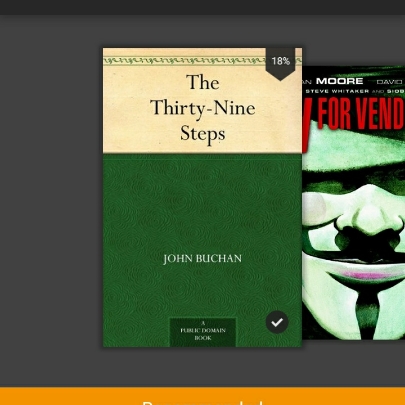 The Thirty-Nine Steps follows the narrator, Richard Hannay, as he goes on the run, chased by some mysterious, evil, political group who are apparently afraid that he’s found out their plot and plans to expose them. John Buchan called it a shocker, which he defined as an adventure where the events in the story are unlikely and the reader is only just able to believe that they really happened.

Here’s the problem with that – I failed. I could not suspend my disbelief. It’s often said that in good fiction you can get away with one unbelievable thing (if anyone knows who first said this, get in touch). I’m not sure how true that is – it probably depends on the skill of the author and the breadth of the work – but it probably works a lot of the time. With The Thirty-Nine Steps, most of the things that happened were unbelievable.

We don’t learn much about Hannay except that he’s back from South Africa trying to persuade himself to sit still in London for a while. It’s not clear why, because he says he hates London and he hates sitting still. Whatever. That’s kind of the beginning and end of his personality. He’s lucky and resourceful but not believably so and has little motivation for anything he does. Other characters are similarly shallowly developed.

The chase itself isn’t too bad and the descriptions of the places Hannay visits as he speeds up to Scotland and then back down a quite picturesque. Why go all the way to Scotland only to come back? No idea. Obviously, it’s a slightly historic version of the UK but a pretty one nevertheless.

So I think I could have forgiven the bland characters, the poor motivation and the flimsy plot if not for the ending. The novella doesn’t so much end as it stops. After a lot of running around and hiding in fields the conclusion just falls awfully flat.