Last weekend P and I celebrated having spent 6 years together (I know, I’m still reeling too). We’d booked into the lovely Nira Caledonia for an evening spent drinking prosecco in a hot tub but hadn’t bothered to book a restaurant. One advanatage of having an anniversary in January is that we rarely do need to book a table – although if there was somewhere I had my heart set on I’d book anyway, just to be safe. When we got hungry P jumped online to find the nearest Italian, which happened to be Papavero. 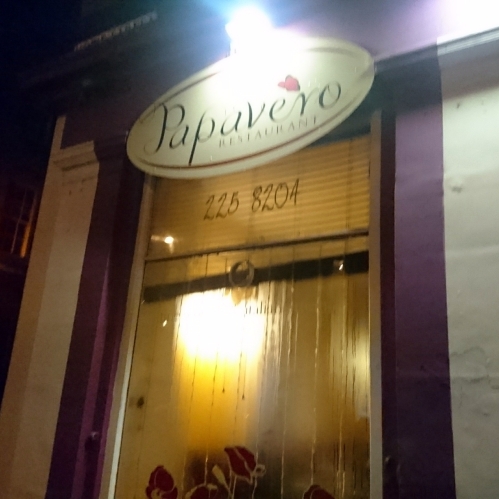 It was only a five minute walk, so we wandered across at about 8:30 pm and asked for a table. The “January is quiet” rule worked and we were led across the restaurant to a table comfortably away from the main entrance.  The place is cosy, but not especially large and as such I suspect booking is smart at other times of year, especially over the weekend.

Here’s the one downside, and I hate to say it, but one of the two waiters we interacted with was kind of rude. Not horribly rude, and maybe standoffish and socially awkard would be a better description, but it was a bit odd. He didn’t seem pleased that we hadn’t booked, although they did have tables available. He was annoyed that I asked if they had any daily specials (they don’t do specials) and he tutted more than I thought was normal. Who knows? Maybe he’d had an awful day. The other waiter was charming and friendly and our interactions with the rude waiter made for something funny to giggle about later more than anything else. It certainly didn’t put a dampner on the evening.

Anyway, on with the meal! We ordered a bottle of Cabernet Sauvignon (it was very cherry-ish and warming and I drank it far too quickly as a result). We decided to share calamari to start. P ordered the spaghetti bolognese for his main (as is tradition) and I ordered a chicken and mushroom pizza. 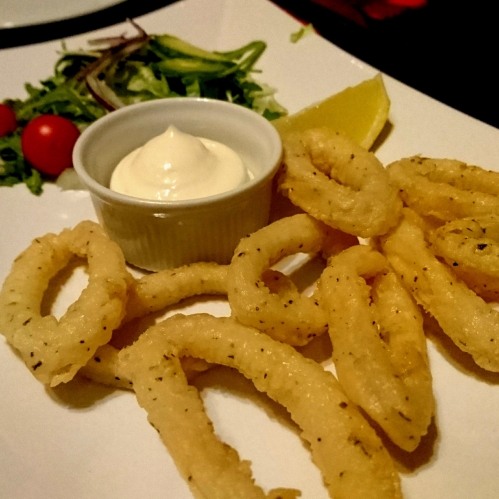 The calamari was good. It’s a dish we order a lot, and often to share. While it was good enough, it was pretty basic, standard calimari. It was cooked properly, although it suffered from the fact that the chef clearly knew the squid was cooked while the batter was still a little less golden than would be ideal, so it looked quite pale. Obviously, if you have to pick between perfectly cooked squid and golden batter, you go for the squid, and no complaints from me there, but the result is that the dish as a while was basically average. Nicely seasoned though, and a fair quantity for the price. 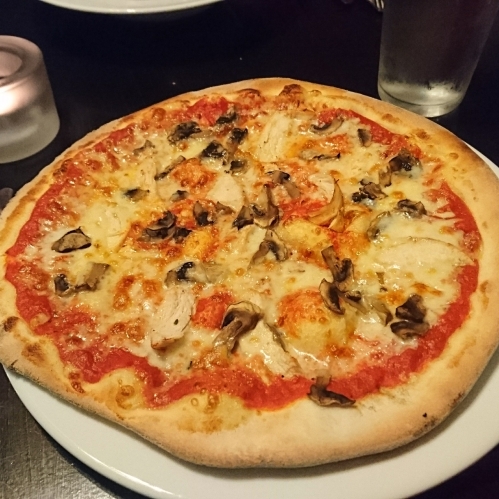 My pizza on the other hand, was pretty darned great. As we all know, a great pizza is made by a great base, and this was a great base. I don’t know if it was sourdough, but it tasted soughdough-y and there was definitely plenty of evoo going on somewhere. Basically, this was everything a pizza should be with no nonsense or messing about with what works. I’m a mushroom obsessee, and if they’d put more mushrooms on it I would have been even happier, but I realise I’m possibly odd in that respect. 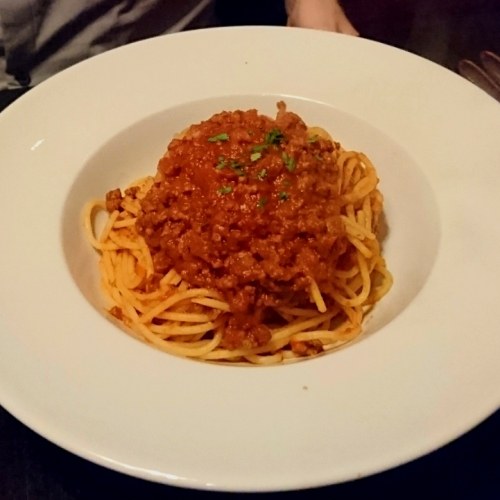 Meanwhile, P engulfed his bolognese in roughly 2 minutes and 14 seconds. I stabbed his hand with a fork (read: I asked politely) to steal a bite. It was also very, very good, although I was surprised that he was enjoying it so much because it was packed with garlic and he doesn’t normally like too much of that. Still, that bite I stole was enough to convince me that I’d definitely try the pasta dishes if I came back here.

I think food like this is a great way to judge a restaurant. You pick the things they should definitely get right. If an Italian place only does a 6/10 calimari you forgive them, but the items they should definitely get right are the pizzas and the spaghetti bolognese. I’m pleased to say that Papavario did indeed get them right. Not the very best Italian I’ve ever been too (we had a heated debate about which one was on the way home) but definitely in the upper tiers. Not bad at all given that our critera was basically: Nearby carbs. 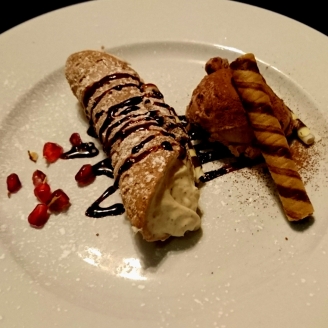 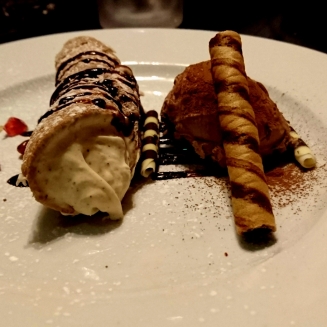 After all that you’d think I’d be full, right? I mean, not if you know me, obviously. The nicer waiter came over and asked if we were interested in dessert. Having not seen a dessert menu I asked what the options were, hoping for tira misu. It wasn’t available, but they did have canoli and I do love canoli. I ordered it, along with an espresso.

I think the canoli was the perfect end to this meal. I don’t often order chocolate focussed deserts, but this wasn’t over the top – the most chocolaty thing being the ice cream. The canoli was crisp and the filling was velvety smooth. We both wandered back to the hotel feeling full and happy.